This snippet is from the first chapter of What Matters Most, a realistic fiction story. It’s about three girls, new to highschool, finding out who they are and what actually matters. The full story covers popularity, romance, bullying, and changing yourself to fit the box. This snippet is acceptable for any age group, but the full story will contain mentions of smoking and drinking in order to address these common topics in today’s culture. This is also only an early version of this scene, which will most likely change in the final story along with many other scenes. The girl mentioned at the end, Laurie, is the lead popular girl who seems to be in control of Trixie in this snippet. 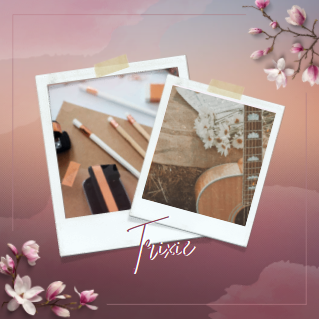 Clover O’Malley is really cool. I met her in my science class, since she’s my lab partner. She has these amazing, round, retro, rose gold glasses and wild red curls that frame her porcelain, freckled-covered face and her eyes perfectly. One eye is pale green, like a flower’s stem, and the other is pale blue, like the sky.

I stare at these eyes as she focuses on the teacher. I want eyes like that. My dad used to say I had eyes like leather, eyes like burning wood, eyes like stubborn hope. But I’d rather have land-and-sky eyes. They’re more unique. They’re… exotic. But she isn’t. She’s so quiet, I’ve yet to hear her say a word.

Clover looks over at me curiously, noticing my stare, before opening her notebook. She begins to write, just like every day. At first I thought she was taking notes, but then I noticed that she centers the words perfectly on the page. So she really can’t be paying attention. I can’t help but wonder what she’s been writing during class. Maybe something more interesting than the lesson our overly dramatic used-to-be-an-actress-I’ll-have-you-know science teacher is teaching us about dipoles.

I lean in as Mrs. Richards describes chemistry with burning passion. Clover’s writing a poem. About our lesson. My mind is blown. I sit back in my chair, wide-eyed. Who does that? Who writes a poem about dipoles? Why would someone want to do that?

“It’s because it makes my brain think about different words, synonyms, and the process.” Her shy, deep voice sounds embarrassed as she whispers in my ear. It’s like dark chocolate defending itself, and I love it. Another thing I wish I had.

“I am seriously impressed,” I tell her. I grab her notebook and slide mine over to her. “Keep writing. I’ll draw.” Immediately I wonder if I went too far. What if she doesn’t want me touching her notebook?

She blinks at me like I just announced that I’ll send her to the moon: I can’t tell if she’s scared or happy. “O-okay….” She hesitates only a second before scooping up my notebook.  It’s thick, with a yellow spine, and she holds it close to her as she writes, her long fingers curving around the edges. I notice the tip of her tongue keeps peeking out of the corner of her mouth as her pencil glides across my blank page in elegant swoops and curves of cursive. Cursive. Like, the form of writing used on the Declaration of Independence, which was written in 1776. That cursive.

I turn to her poem and listen as Mrs. Richards goes on about oxygen and hydrogen atoms and the “miracle” of water as I read the poem. Clover seems to think water is a miracle too, but when she says it, it sounds poetic. I sketch an ocean across the bottom of the pages, adding splashing waves and drops that reach for the words playfully, wishing I had colored pencils. Colored pencils make all my drawings look better, especially things that are meant to look alive.

“You’re amazing,” Clover whispers, pushing her glasses up higher on her nose.

“Thanks.” I grin. “So are you.” I can’t help but feel a slight pang of regret. She’s so nice…. If I wasn’t trying to keep it cool with Laurie, I would talk to her outside of class. But Laurie has a no-nerd policy, and I don’t want to break her rules just yet. I’m still so new.

But as she blushes softly, obviously pleased, I can’t help but wish that we were friends.

On the bus ride to Amelia’s house, I stare at the intricately drawn ocean. Only Trixie Alcaraz could draw an ocean that fast, without color, and make it so beautiful. That’s why Laurie likes her: she has this magical touch. She can take a basic yellow raincoat and make it something that should be on the front of a magazine. She can take dark brown hair like her own and twist it into these amazing braids that she coils on top of her head. She can take a dork like me and make me feel cool for a minute. I sigh as I trace my finger along the curve of the waves. I wish I could draw like that.

“You still thinking about that?” Amelia Standish, my best friend since forever, asks. She’s sitting next to me, and her almost-coal-black eyes, which announce her mom’s Korean heritage to the whole world whether she likes it or not, are staring at me.

“Yeah,” I answer, blushing just as the old bus clunks over a bump in the road. Amelia slides across the torn gray seat into me, one of her shoulder-length black pigtails slapping me in the face. We both giggle before returning to our conversation.

“I guess it’s already turning out to be the best year ever, huh?” Amelia’s high-pitched voice betrays her, announcing her jealousy even though she’s smiling. We made a pact this year, since it’s our first year at Northmoore Highschool, that we’re going to do everything we can to have the best year ever. Between my recent blog followers and this, I know she’s a little covetous.

“Oh don’t be divvy, Amelia! Remember our first halloween together?” I smile softly, grabbing her hand.

She grins sheepishly, embarrassed that I caught her envy. “Yeah….”

We were in kindergarten when we met. The grade when getting red in the behavior chart is the end of the world and when catching the tooth fairy is a challenge you plan on being the first to accomplish. I was the shy new girl who’d just moved to Oklahoma City, and I didn’t know anyone. She was the girl who knew everyone who was her brother’s friend’s sibling by name and favorite color. I walked into the classroom on the first day wearing a pink dress with blue butterflies and a bow, and I stared at my black Mary Janes through My Little Pony glasses. She was the girl with jeans and a purple T-shirt, her headband her mom had carefully fixed wonky in about ten minutes. I didn’t talk to anyone, and my teacher and mom had to fight to get me to let go of my mom’s hand. But as soon as I did, Amelia walked over with a toy in hand.

“Hi! I’m Amelia Standish! Do you like ponies?” She grinned. She was already missing a front tooth.

I only nodded, but she grabbed my hand and pulled me off to show me all of the cool toy ponies our teacher had bought.

From then on, we spent every day together. For Halloween, we dressed up as twins. I wore a black wig and she wore glasses. We pretended to be Elise and Ella, twin names we’d come up with. We were inseparable. And that wasn’t about to change.

“I couldn’t forget,” Her brother Caspian inputs, smirking at us from a seat across the aisle and one row back. He’s sitting next to his actual twin, Quincy, who is smiling too. They’re in 12th grade. “You guys were such annoyingly cute little dorks. And what do you know? It hasn’t changed!”

We exchange a glance and then stick out our tongues at him in perfect sync. Kaley Kriesel is a 15 year old Christian from Oklahoma, USA, where she pursues Jesus and studies Spanish, Latin, English, and a variety of other subjects from her home. She has been writing for as long as she can remember, and when she isn’t writing, learning, or socializing, you can most often find her playing ukulele or reading a book. She has two blogs, The Little Novelist and Sketch Scribble Scribe and is working toward an email list.

I'm a storyteller, songwriter and author who loves God, fairy tales and music. I write about tales, creative tips and process on my blog, debbiecoll.com. View more posts

8 thoughts on “What Matters Most–Guest Post by Kaley Kriesel”